After Cohasse Country Club opened in 1918, the famous Olmsted Brothers were hired to design the club’s landscape architecture. The images below are drawings proposed by Olmsted. While Olmsted was working on Cohasse, they were also working on well-known locations such as Fishers Island Club and Mountain Lake.

For nearly 100 years Cohasse Country Club has stood as a shining nine-hole example of the genius of Donald Ross. The layout has remained essentially the same golf course that opened for play in the summer of 1918. Yet even in the modern era the design never feels archaic, continuing to challenge, beguile and entertain golfers. The addition of a few bunkers and the slight relocation of a green in 1927 and 1930, the work all done by a Ross construction engineer Walter Hatch undoubtedly with Ross's input, are the only substantial alterations to the layout. What is here today has stood the test of time, and is an enduring testament to Ross's talents.

The road to the creation of Cohasse Country Club began in 1916 when three brothers, all prominent Southbridge businessmen, Channing, Albert and Cheney Wells, brought Ross to assess the value of the Cohasse Farm as the site for a golf course. The Scotland-born architect assured the Wells brothers that the land was more than suitable. Taking him it his word, the Wellses, owners of American Optical, at the time the largest manufacturer of optics in the world, hired Ross. He laid out a nine-hole course, and construction began shortly thereafter.

Cohasse opened officially on July 18, 1918 with six playable holes. That day the brothers invited approximately 200 locals to the dedication. During the event, Channing Wells informed the attendees that the real reason for the gathering was to formulate plans for a country club. In essence, the brothers turned over use of the property to the future founding members and Cohasse Country Club was born.

The Wells brothers had made a wise choice in hiring Ross. By 1916 he had emerged as one of the finest architects of his era. That year Siwanoy Country Club became his first design to host a major when the inaugural PGA Championship was played there as Jim Barnes defeated Jock Hutchison 1-up. Ross already had a number of other acclaimed works under his design belt including the first three courses at the Pinehurst resort as well as Worcester Country Club, Shennecossett Golf Club, Wannamoisett Country Club and Rhode Island Country Club, just to name a few.

As with all quality Donald Ross designs, Cohasse challenges every level of golfer while also providing an enjoyable experience. Ross displays his acumen from start to finish including one of the only times in his career that he laid out back-to-back par-3s. Cohasse plays 3,061 from the blue tee markers, 2,965 from the white, 2,658 from the gold and 2,599 from the red. The men's par is 35, while the women's is 36. The layout sits comfortably on the rolling terrain and Ross uses the rise and fall of the land to add variety and challenge to the holes, requiring golfers to play shots from diverse lies. There is mix of short and long par-3s and par-4s. Some reward length while others put a premium on accuracy. The lone par-5 presents a test of a golfer's skill from the tee to the two-tiered green whether treating the hole as a reachable par-5 or playing it the traditional way. Most of the time Ross allows for Cohasse's greens to be accessed via the bump-and-run, then again there are those putting surfaces where an aerial approach is the favored play. Ross incorporated into the Cohasse design stiff but equitable penalties for missing greens, and a deft touch with the putter is required to score well.

Within a few years of opening, Cohasse's status was among the best in Massachusetts. By 1925 Cohasse was charging a guest fee of $3 a day, the same rate as some of the finest clubs in the metro Boston area, including The Country Club in Brookline. While the layout has remained largely untouched for the past 80-plus years, other additions and changes have occurred to upgrade the facility. A practice range and lower parking lot were built. The clubhouse was redone and the pro shop was improved. In 2004, a double row irrigation system was installed. The pond on the fourth hole was expanded and a new pumping station was purchased. The 2000s saw a tree removal program implemented to improve turf quality and remove overgrowth, bringing the layout closer to the original intentions of Ross. Several bunkers were rebuilt in 2005.

In the nearly 100 years since it opened, Cohasse remains one of the finest Donald Ross designs in New England, and one of the very best nine-hole golf courses in the United States.

Anthony Pioppi is a golf writer, historian and the author of five books including The Finest Nines, North America's Best Nine Hole Golf Courses, in which Cohasse is ranked No. 8. He lives in Middletown, Conn. Cohasse Country Club is where he first set foot on a golf course. Click here to see his interview with Golf Channel. 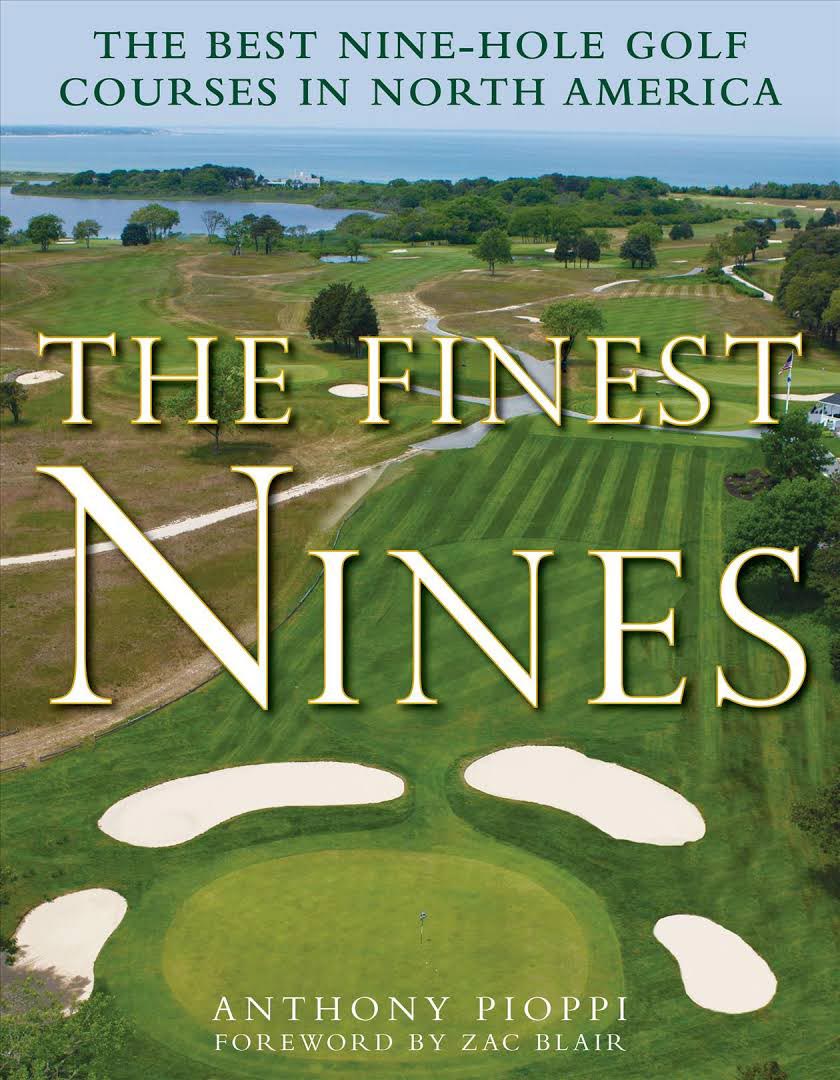 The 8th best nine-hole course in North America, and it's right in your backyard! 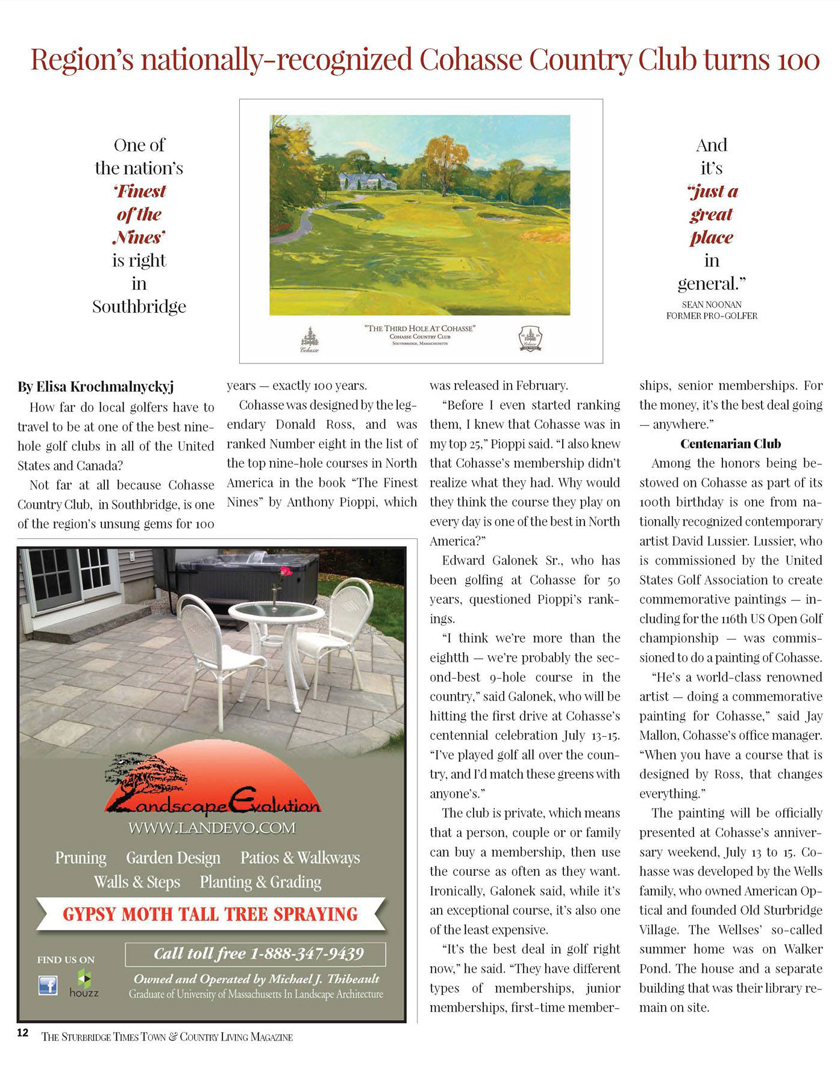 Read the Sturbridge Times Article about Our 100 Year Celebration
How far do local golfers have to travel to be at one of the best nine-hole golf clubs in all of the United States and Canada? Not far at all because Cohasse Country Club, in Southbridge, is one of the region's unsung gems for 100 years - exactly 100 years.